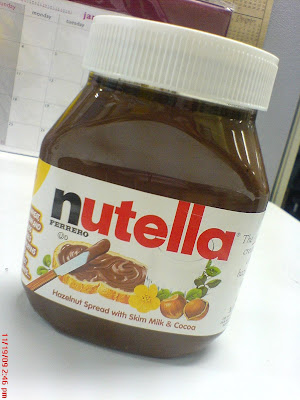 I was able to have a first taste of this hazelnut spread courtesy of my sister’s sponsors from Italy. Ok, let me clarify that. Back then, our parish takes care of some of their parishioners’ kids through sponsorship. They find families in Italy, the home of their congregation, who are willing to sponsor kids in their studies and in general. My sister and brother were on of the fortunate kids who were sponsored by the parish but only my sister has a family sponsor. There.

A package would arrive for her twice every year and its contents varies. As soon as we get home from the parish where we pick up her package, we would gather around and open her box altogether. That’s how excited we are for her. Then in one of the packages comes this Nutella. That’s the first time we heard of it as we’re used to peanut butter and other local spreads. After that first taste, the more we looked forward to every package my sister receives from her family in Italy.

There was one time when she was sent this really huge jar of Nutella. The jar is a glass one. Somebody mistakenly placed the newly opened jar at the top of our ref. I think it was my mom who opened the ref and the Nutella fell. The jar broke into pieces and the spread is all over our floor. We were so sad and regretful because we just opened it. But we didn’t want to gamble so we just threw everything to the bin. Sad.

Then sister graduated and no longer needs support from her Italian family. This is also when we stopped eating Nutella. Little did we know that it is actually being sold in the local supermarket. And since we receive this yummy goody for free, we didn’t know how much it costs until we saw it in the grocery. My eyes got big when I saw the tag price of the smallest jar! PhP250+ or $5 for a 375g jar, I think. Eh yung biggest jar kaya magkano?!

But my friend Therese taught me something. If you go to duty free in Subic, you’ll be able to get the large jar for a price of the small jar. And that’s what exactly I did, thus the picture above. When she went to Subic, I asked her to buy me one. A few hours ago, while eating merienda, I told her that I should have asked her to buy 2 so I could have given the other jar to my sisters. I’m sure they’ll appreciate it even if I ask them to pay me PhP380 or $7.6 because they’ll not be able to buy this large jar at that amount if they go to the nearest grocery.

Hay, Nutella is addicting! I can eat it with or without bread. I still have to try it with banana though, which I read is a fantastic combination.

How about you, what spreads do you swear by?