I had another chance to cook some two weeks ago when my parents-in-law went home to Lusiana, Laguna to attend the first birthday of nephew’s daughter. I tried cooking this: 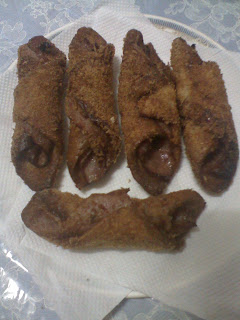 I know. It got overcooked thus the golden brown effect became toasted! But it still tasted good, based on the performance. (It made our dinner instead of merienda!) I’ll do this again next time with a twist (salami or tuna or something else) and I’ll make sure to keep the color to golden brown.

Here’s how to do this recipe. Special thanks to Pinoy Cook’s Pizzaron, which was the basis of this recipe.

We noticed that after frying, the ham became a little salty. Mon said because it was fried. Not sure though.