Like I said before, I’ve been commuting for-how-long-i-can’t-remember. No, I am not complaining. This is one of those experiences that kept me thinking. Even now.

I can’t remember when this exactly happened but I’m sure it did. Let me give you a background first. I live in Proj 8, QC. The most convenient/practical way for me to go home from Eastwood is (1)Take a jeepney going to Cubao. (2)Get off in Puregold and walk going to Farmers Plaza. (3)Ride an ordinary bus bound to Novaliches. There are two kinds of buses that we usually encounter: (1)Slow and bakaw and (2)Fast and madiskarte. Of course, I prefer the second one but when I don’t have so much choice (like when I’m in a hurry), I take what’s available.

So going back. A mother and her son who is about 10 years old sit in front of me. In front of them sat another boy who is about 8 years old who I assumed is her son too. The bus is almost full but the driver kept on picking up passengers. When we reached Q-Mart, 4 people went aboard: a mother, her son, her sister and her mother. The conductor (fare collector) then shouted “Yung bata ho pakikalong na lang. Immediately after that, the first mother asked her son beside her to sit in her lap and called the other boy in front of them. That boy sat in her lap too. The second mother sat beside her and told her son to sit in front of her. Are you following so far? Yes, the second mother and her son took the seats the first mother’s sons left.

After a while, the second mother asked her son to stand up. I didn’t know why. I can’t understand why. I saw her son frowned and questioned her. I heard her say “Kasi walang magbabantay sa iyo dun“. The boy was just in front of her right? The second mother’s sister and mother were seated a few seats at the back of them. She told her sister “Patayuin mo nga ito dyan“. The boy then walked towards her tita and stood in front of her. There are other people standing in between them. After some time, the boy went back to his mother, still standing. I think he wants to check if his school bag, which his mother is holding, is ok. The seat in front of the second mother is still vacant. The boy remained standing until we reached Munoz. The first mother still has her two boys in her lap.

Now I’m thinking. The first mother may have no extra money to pay for his sons’ fare thus she let both of them sat in her lap. I don’t know what was wrong in the seat in front of them that the second mother let her son to stand up like an old man. I think again. Do mothers really do these to their children?

Disclaimer: The following post is due to my recent frustrations about life in general. Ok, let me correct that – a working mom’s life and a concerned wife’s life.

However, they say that German Measles is most contagious a week after the rashes appeared. It has been 5 days since the rashes disappeared. I’ve been telling my hubby to see a Dr since they are the ones who said he has this viral infection and they can also say if he’s already cleared. But he’s so insistent that he’s check up will be on the 23rd. So be it!

Let him play with Ayex from afar. Let him stay in the other room for as long as he likes. Let all other people in the house suffer when Ayex starts her temper tantrums because her daddy played with her for a while and suddenly left her!

I’m proud to say that I’m still very sane after a year of being married. Hahaha! 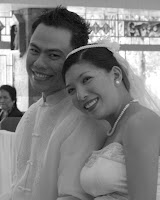 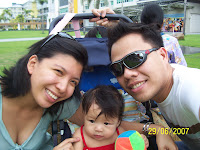 How did we celebrate it?? Well, my hubby is still in the process of recovering from German Measles and does not want to spread the virus to other people so we just had dinner at home. I cooked (1) Beef with broccoli in oyster sauce and (2) Buttered mixed vegetables with quail eggs. It was actually my first time to cook in my in-laws place ever since I lived there so I was a bit nervous. Good thing everything turned great! We had Nestle Butterscotch Caramel Twist ice cream for dessert.

We were not able to hear the mass since our little Ayex was kinda sumpungin and I find it hard to leave her. Instead, I prayed the rosary and my mom offered a thanksgiving mass for us. 🙂