That is how I will describe Asian Hospital in Alabang, Muntinlupa.

I first set my foot in this hospital more than 3 years ago when I had Ayex’s 4D Ultrasound. They have an exclusive area for Women’s health and since we didn’t wander around that much, it’s only lately that we discovered its other amenities.

It was a few days or a week before I gave birth to Maxyn. We transferred to Las Pinas because it is a lot nearer to where I’m giving birth. Prior to the transfer, Ayex has been having fever, only at night. She’s her perfect self during day time and we don’t know suspect a thing that may be causing the fever.

However, on its 4th day, to keep us sane, hubby and I decided to bring her to Asian Hospital it was a very good choice we have made. 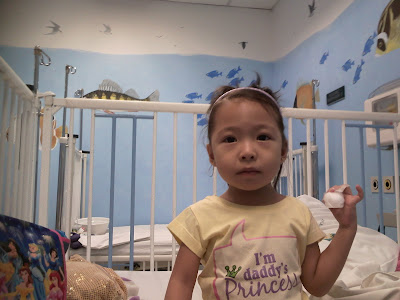 We had a hard time keeping her calm at first because it’s her first time. Later on, she already behaved because she wanted to go home already.

Here are a few things I like about Asian’s emergency room.

Ayex enjoyed the TV and the drawings. We didn’t stay that long. The doctor said it was only viral and will go away on its own, which it did. I am really glad that our health card is affiliated with Asian Hospital, we didn’t pay for anything. I just hope though that we won’t need to do that next time. I hate bringing kids to the hospital even for wellness check-ups only.

When I woke her up yesterday morning for school, she won’t open her eyes and when she finally did, she complained that it hurts. She didn’t want me to open the light so I just took the flash light to see why. To my surprise, her eyelid is swollen.

Initially, hubby and I suspected it as insect bites, a cockroach perhaps. But how can that be? We make sure to clean the bed every night before we even sleep to remove the dusts it could accumulated the whole day. And if was indeed some insect, I should have felt it also as Ayex sleeps beside me.

When we came home last night, I noticed that her eye is a bit bigger already but it’s teary and nagmumuta. Good thing hubby is working from home today, he was able to bring Ayex to the pedia.

What is a stye in the first place and what is its cause?

A stye — commonly called kuliti — which is a boil that has developed at the base of an eyelash. This usually happens because the eyelash root has become infected by bacteria, often by rubbing the lid with infected hands.

At first a red lump appears at the edge of the eyelid, which then gets larger and eventually bursts after a few days, often during sleep. Despite its appearance, it will rarely cause any problems and usually goes away on its own in about five to seven days.

To ease your baby’s discomfort you can use warm compresses. Use a clean warm towel to bathe the eye for about ten minutes, four times a day until the stye starts to go down. Often keeping the eye clean is all you need to do.

If the stye does not get better or if your baby keeps getting styes you should contact your doctor. Sometimes an antibiotic ointment is needed to clear the infection. In some instances, incision and drainage may be necessary. Source

Ayex is definitely prone to styes because she has this habit of rubbing her eyes. And like any little girl, when she plays, she gets dirty hands. That is probably the cause of her stye. The pedia gave her an ointment and we were instructed to put warm cotton on her eye every four hours.

Lesson learned, keep your kids’ hands away from their eyes or even mouth and always clean them either by frequent washing or using alcohol.