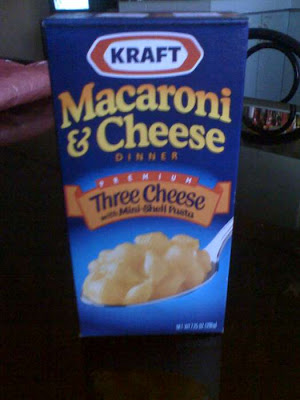 I’ve always been a fan of mac and cheese since I tasted it from Kenny Rogers. Not sure where else this is being offered here in Manila.

Even though it’s a personal favorite, I didn’t bother cooking one for myself nor for my family. Then one time when we were doing the grocery, I found a mac and cheese recipe in a box! Since then, I’ve been telling my colleagues about it even if I haven’t tried it. Last week, I finally got two boxes to try.

When I woke up this morning (the real one because I also woke up at around 5AM, which I’ll tell you why later), I requested Ate Meriam (our super helper), to boil six cups of water for me. When I bought the boxes of mac and cheese, I also bought the other ingredients I’ll need namely: milk and butter. That’s it? Yes, that it!

When the water is already boiling, I put in the pasta (included in the box) and let it cook for about 6-8 minutes. When done, I drained the water. Then in the same container, I put in the 3 tablespoons of butter; 4 tablespoons of milk; and the powdered cheese pack (also included in the box). I mixed them and I was so amaze seeing the pasta swirls turn orange y! In a matter of 15 minutes, I have my homemade mac and cheese! 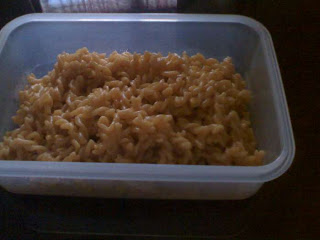 Therese and Beng tasted it and they said it’s good. I told them that given it’s price, it’s all worth it.

Now, what about Ayex? Well, she just fell of the bed at around 5AM when hubby woke up to pee. I was probably so sleepy that I didn’t hear hubby told me to watch over Ayex. Good thing she was not hurt because she fell on her play mats. That’s the third time in a span of two years.