If one can die from being envious, I’m already dead. I always find myself envious of my online friends who always know the latest contests in Facebook. Maybe that is one of the disadvantages of being a working mom. Thanks to a friend who told me about Neutrogena’s promo over Facebook.

During the promo, Neutrogena Philippines posted four tasks. You join by submitting a photo in their wall that depicts your answer to their question. The first 50 submitters win. At least that is the mechanic that I know. I was able to join tasks 2-4. Since I joined, I make it a point to open their page almost everyday to see if I got lucky. I did not make it for tasks 2 and 3 so I was very eager at task 4. I really want to win the full range because I am in the process of starting a skin care regimen and I want to use Neutrogena.

I was disappointed when I saw the result of task 4 because I didn’t make it again. I checked those who won and found that some winners posted their entries later than I did. I asked the Neutrogena admins about the mechanic they used. Yes, that was how bad I wanted to win. Hahaha! Finally, I gave up.

The following morning, I saw a private message upon opening my account. The message came from another online friend telling me that we won from Neutrogena. Apparently, some winners already won in the previous tasks so the admins updated the list of winners.

Last Friday, before we celebrated Ayex’s birthday, I went to SM Makati to claim my prize. Indeed I am very lucky to have the full range for free. There was a man in Neutrogena’s booth, buying products for himself. As the Neutrogena girl get my prize, I told him how I won. He congratulated me and told the other Neutrogena girl that there should be a promo for men as well. Hahaha! 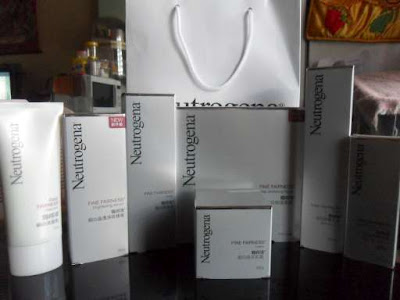 I will start using these products and will post the results here.