My cousin, Kevin, asked my mom who asked me to order these Philippine All Star shirts online. It was not part of my priorities since I know I still have time. Well, not until Tito Manny (Kevin’s dad) announced that somebody just flew in last Saturday from Guam and will be here for just a week. Suddenly, they need the shirts ASAP so these can be brought to Guam already. It would be costly if we ship it there directly.

So I checked the allstars2005 multiply site last Monday. The reply was a simple “please wait for confirmation if all orders are available”. So ok, again I need to have the shirts at least before Friday. Tuesday, I got the no confirmation despite of the several follow up text messages I sent. Wednesday, I received a text that all orders are available. I asked if they can ship through Air21 because I really had a bad experience with LBC plus their rates are waayyyyyyyyyy cheaper. I received the reply to this question 2am of Thursday. I’m in a rush. My mom, Tito Manny and Tito Louie (youngest tito) kept asking me when will I get the shirts. It’s like I don’t have other things to think of! 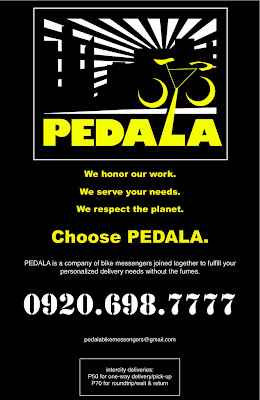 So it was Thursday. I haven’t received how much is my total bill, where should I send the payment etc etc. I don’t have time anymore. People taking care of allstars2005’s business are quite difficult to deal with. The transaction is realllllly slooooooooow. Then I remembered Pedala Bike Messenger Service. At around 10:30am, I called Pedala’s “hotline” and asked if I can schedule for a round trip service. Ms. Candy was very courteous as she asks me questions regarding the service I want to avail. Then finally she said ok and asked me to just text her where the pick up will be and where the biker should go. After that, I texted the person from allstarts2005 that I’ll just have the items picked up at Brewing Point Tandang Sora. At past 11am she informed me through text message that the biker will be in Eastwood after lunch. I’m a happy person. In just a few hours, I will no longer have to think of these shirts!

By 2pm, I was informed that the biker is already at our lobby waiting for me. Glenn, Pedala’s biker, sports a yellow biking shirt with Pedala’s logo and name. I handed him the payment for the shirts and gave him the a print-out of the map where he will get the shirts. He then gave me a sort of waybill. He told me that he’ll just pick up something from Lafayette then he’ll go to Brewing Point. I was ok with that, besides I’m not their only customer. He’s easy to deal with and very professional looking. He joked that we’ll be textmates later then he left.

By 3pm, I got a call from Glenn telling me that the shirts are not yet there! Panic mode again! I need the shirts already! My fault. I forgot to inform the person from allstars2005 that the person who will pick up the items is already on his way. I called her but her phone died! I tried texting other numbers, even allstars2005 landline number but no one’s answering! F***! Nahihiya ako kay Glenn kahit pa paid service yun kasi may iba pa siyang pupuntahan! Finally, after some 20 or so minutes, I have reached allstars2005’s globe number again! She said she’ll be at Brewing Point in 15minutes. Again, meganakakahiya na talaga!. I told Glenn about this and he said he’ll just wait. Thanks for being really patient! By 4pm, Glenn told me that he got the shirts already. I told him that I’m ok even if he proceeds with other clients first before going back to Eastwood since my shift ends at 7pm. I got the shirts from Glenn by 7:15pm.

The whole transaction with Pedala only costs PhP100 but I gave extra since I caused a lot of hassle, not to mention Glenn has to pay for parking! Buti na lang hindi nadala si Glenn! When opportunity rises, I will surely use Pedala’s service again. Same day delivery, cheaper costs, friendlier people, better for the environment. After telling my mom about this, she said she’ll also promote Pedala’s service in their office!

Thanks Pedala! Till next time!