I was suppose to post this last night but I was super duper tired already and didn’t have enough powers to open sapphire.

We had so many firsts yesterday. We have a get together in McDonald’s Greenbelt with my babycentral family. Usually, when I have events like this, hubby is always in tow as I don’t know how to drive yet. But since he came from a Friday shift, we agreed before-hand that we’ll just commute to Makati. It was my first time to commute with my 2 girls that far. Usually I only take Ayex with me when I need to have a quick stop by SM North or the near groceries which is about 15 minutes away. When I first took Ayex with me to Makati, I was super tired. Imagine I have two girls with me, one is infant. Good thing I have both Em and Ate Yam with me.

Initially, my plan was to take a cab so it would be less hassle. However, hubby said it would be too costly. I don’t really mind the cost but Ayex insisted that she wanted to ride the train. So we took the MRT. I asked Tatay to drive us to the North EDSA station as hubby is still asleep. Lucky us, the lines were not that long. And since it is the first station, we were able to get a good seat.

Apart from Maxyn, it was also Em’s first time to ride the MRT. My seatmate was a bit shocked when I told her that Maxyn is only 4-months-old when she asked. She said she looks like she’ll be turning one soon.

So it wouldn’t be so hot, we took the connecting route of the malls. From the MRT station, we went to SM Makati, then to Glorietta, then to Landmark and finally to Greenbelt. This is another first for Maxyn, Em and Ate Yam. Too bad I forgot to take their picture as a souvenir. Ayex have been there several times already as we usually have our get together in that McDo branch.

Our afternoon was filled with fun. I’m happy that Ayex participated in the games and mingled with other kids. I am happy too because I am reunited with my online friends. More of the experience will be blogged in another post.

By 5pm, we said our goodbyes to other moms. We were lucky that Mommy Gie gave us a ride until St. James even if Ayex kept insisting that she wanted to ride the train again. From St. James, we took a jeepney to our village. That’s another first for Maxyn. She even kicked the man sitting beside her! The man said ouch and turned to see who kicked him. When he saw that it was Maxyn, he said Ay baby pala!. Maxyn was really funny!

Sorry for the long post. Anyway, let me leave you with Maxyn’s picture at the train. 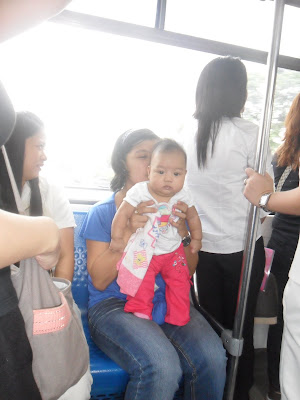