It was a pretty busy weekend for Mon, Ayex and me but we surely had fun! We had loads of firsts too that we want to share with you.

February 14, 2009: It’s actually Valentine’s day but Mon and I didn’t plan a date just for the two of us. Instead, we planned an out of town with our tot and Ate Meriam! Ayex loves seeing airplanes and balloons so much. I on the other hand have never seen real hot air balloons before while Ate Meriam has not seen other places in this side of the Philippines since she got here October of 2007. And so Mon thought of bringing us to our first Hot Air Balloon Festival in Clark, Pampanga.

We left early in the morning, around 5am, so we can catch most of the flying activities. Good thing our ride was smooth and fast. We hit the heavy traffic inside the airbase, because cars started to park on the sides of the streets to take pictures. Luckily, we had some view inside the car. 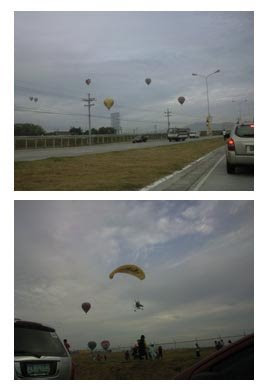 Our view inside the car

Ayex delighted as she sees the big balloons flying above us while I had fun looking at the para gliders. Soon we found ourselves in the parking area. Too bad we forgot to bring Ayex’s stroller so I had to carry her. There was a long line to the ticket booth but I was able to get our tickets fast. Inside, there were a lot of booths: henna tattooing, souvenir shops, foods, clothes, etc. We found ourselves amusing at the different exhibits in the welcome area sponsored by the Air Force of the Philippines. There were picture area, gun area and plane area. I was amazed! Ayex, on the other hand took a while before she realized she was seeing real planes! 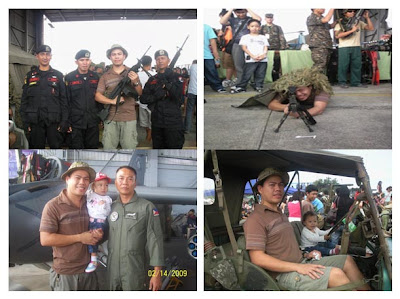 Mon’s pictures with the Ayex and the Army

Among all of us, Mon is probably the second happiest person in this trip as it’s his dream to be part of the military even before we got married. He took every chance he could have to pose for pictures! Hahaha! It was so hot as the event is on an open ground area but I still enjoyed. I had photo ops with Ayex as well on the planes. 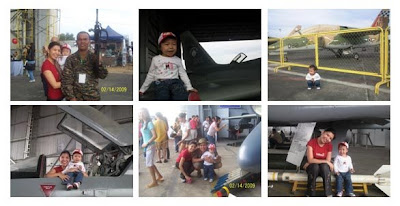 The area is packed of families with their kiddos. We decided to have an early lunch first before going somewhere else as most of the flying activities are over by 10am. Note to self, next time we attend this festival, we’ll bring lots of food and water as the food inside is super expensive yet very ordinary. After the lunch, we went around Clark. By that time, Ayex is already sleeping. We went to several duty free shops where I got to jeans: Guess and Levi’s – both my first. After shopping, we went to the Dream Office where Mon worked for 5 years before. After the short visit, we went back to Manila. That was around 5pm.