Okei, I apologize for not blogging again for more than a week now. I don’t know what kept me busy these days. There’s probably none – I’m just too lazy to write.

Anyways, let me show you what I got in the Raffles Bodega Sale I told you about in this post.

Originally, I planned to buy a Visions 5L Casserole. It’s price on last June’s sale was PhP1200 – but I didn’t have any money that I can spend that time, remember? This time, I was very determined to get it, even though I know I will just stock it. But I guess my determination was not that strong. After seeing that the sale price increased from PhP1200 to PhP2000, I forced myself to forget about it. Instead I got myself something else, which I just remember now, was supposedly my Christmas gift to myself. So Therese, I was wrong. I already got myself something – but I want something else…

Where are the pictures?! Okei okei okei. Sorry. Here they are. 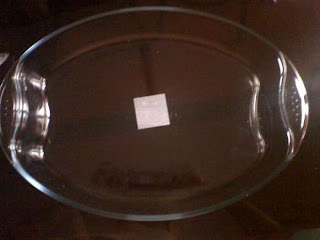 This is my Christmas gift to my mother-in-law. I realized that whenever we cook pasta or pancit, we only place it in her plastic wares, which I think is not very presentable and appealing. So I go her this Oval Pyrex Roaster. 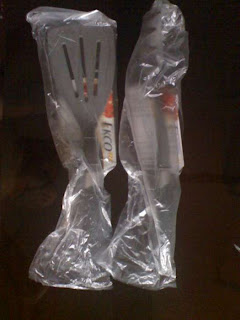 I partnered this roaster with a pasta server, which we also don’t have here at QC. I was too excited about these gifts that I didn’t wrap them anymore and gave them to MIL just the way they are. Hahahaha! 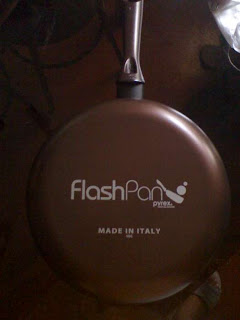 This was my supposedly Christmas gift for myself. The one that replaced my Visions 5L Casserole. This is a Pyrex Flash Non-Stick Pan. 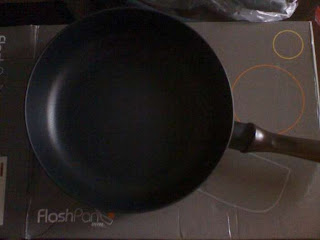 I wondered before what Teflon is. How to use it? What makes cooking with it easier than the normal frying pan. And so thought, one day I’ll have my one non-stick pan. Not that I hated using the traditional frying pans but I just think that non-stick pans are really really cool! I partnered this pan with a long turner (above, beside the pasta server), because Therese and Shindie said, if I use the ordinary ones, it will scratch the Teflon.